In Dec 2019, I went to Miyajima. On that island, there is Itsukushima Jinja, one of the World Heritage Site in Japan. 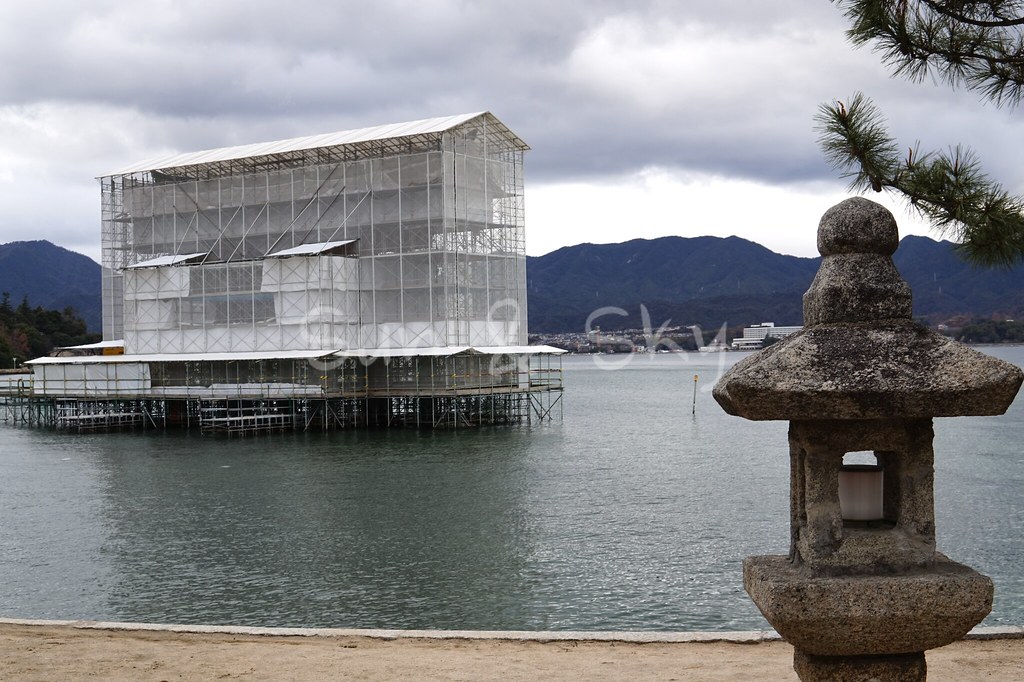 The shrine is settled on the beach.

The big roof on the left is not the shrine. The shrine itself is near of the maintaining gate.

It often get damage by the storms (of course), people reform/ maintain for 1600 years.

When you walk on the inside of the building, you may see there are some cracks on the floor, I could not take a shot well, it is for flooding to protect the building from floating by the water. There are less gaps or steps what are unfriendly for toddlers, elders, or other people who has problem on walking. I saw a lady on the wheel chair on the shrine. But I do not recommend to wearing spike heels.

The origin of the current buildings are built on 1168, the building style is Shinden Dukuri (寝殿造), the typical style of Nobilities mansion in those days. 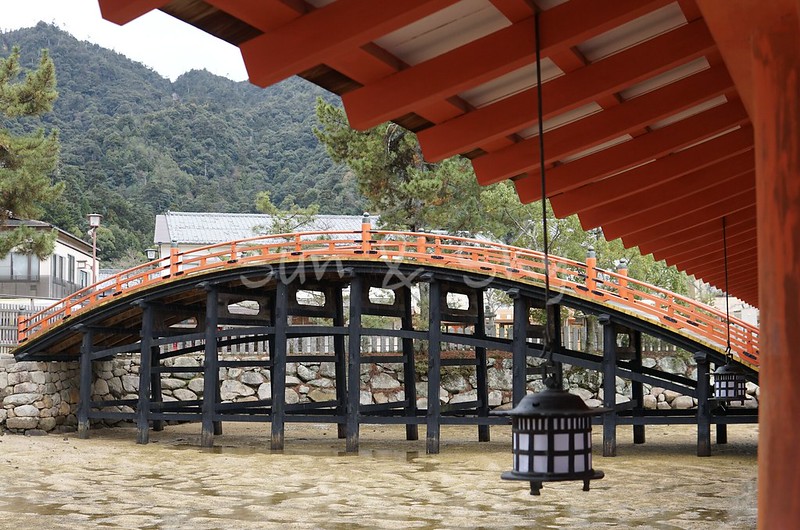 The buildings are connected by corridors, but it is not round corridors, I left the shrine from the back gate, yet seems you are able to go back to where you come from. (In the season of many people are visiting, I do not think it is a nice idea.)

Here is the shot from higher place, Senjyo Kaku (I mention later).

Hours: It is up to the season, please check the HP I link below.
Admission Fee: ¥300
Place :1-1 Miyajima-cho, Hatsukaichi, Hiroshima 739-0588
HP:http://www.en.itsukushimajinja.jp
How long Sky stayed: 30 mins
Also worth visiting nearby:There is a museum too.

On the other side of the shrine, there is a small temple, and a museum (厳島神社宝物館).

Seems I could not take a shot of the museum building.

This old shrine has many “treasures”, the most famous and important is “Heike Nokyo (平家納経)“, Taira family copied sutras gorgeously and donated this shrine in 1170s.

On the museum, you can see the replicas (but not allowed to take photos).

There are some of the pictures (of the replicas), uploaded by Tokyo National Museum.
https://webarchives.tnm.jp/imgsearch/show/C0096134

I show you the picture again.

There are Pagoda and Big roof building, they are also parts of Itsukushima Jinja, and what I am talking about in this section.

After I left from the main building of Itsukushima Jinja, I turned and walk up a hill. This island itself is an old battle field. This hill is also.

Here is the Pagoda.

This Pagoda is not counted as the national treasure, but built on 1407.

Senjyokaku is too big and the hill top itself is too narrow to take a shot. Senjyo means 1000 pieces of Tatami, the metaphor of “large & wide”, actually 857 pieces of Tatami.

This building is built by 1587, under the order of Toyotomi Hideyoshi (豊臣秀吉). Originally, this building is a Buddhism temple, but currently it is reformed as Shinto Shrine.

There are some pictures, guess they are not quite old like this building itself.

The island itself is full of tourists and somehow noisy. There are less people on the hill. Sitting down the sea side with hearing the sound of waves, and people’s noise from the down.

It is a really chill & dope.

You have to pay for the admission, and do not eat or drink.

I went to Ninna-ji (仁和寺) on Oct of 2018. This temple is the highest temple in the city of Kyoto. Emperor Uda founded ...

Kyoto: Kyoto Gosho (The Imperial Palace in Kyoto) is now free to visit

It is not the first time to visit the Kyoto Gyoen (御苑) , but those days palaces had not been not opened to visit. I c...